I had intended to do this a while ago, but found after my October 2012 trip that I had missed a few crucial photos and decided to wait until I had them. Well, I still missed one, but I'm not waiting another 12 to 18 months!

80-G is a sub-section of Record Group 80, "General Records of the Department of the Navy, 1798-1947." It is an all-photographic collection and is Officially titled "General Photographic File of the Department of Navy, 1943 - 1958." The dates are actually incorrect in that there is a bunch of photos that are pre-war. By most standpoints it is a mess - there is not an orderly progression of photos but rather a mish-mash turned over by different commands within the Navy. There are duplicates and subjects that repeat as different groups may have turned in the same photo or set from their internal records. Some times reproduction is poor as the copy is the 5th or 6th generation plus from the original. There are gaps where photos were stolen or damaged beyond use and discarded, and NARA has not the budget or time to replace these from the negatives that are stored separately.

That said, it is a treasure trove of photos - 2861 boxes of photos taking 600 linear feet of shelf space in the archives. That many photos makes for an unwieldy data set - one can't simply google the subject and have all of them shown to you. It starts, with a card catalog: 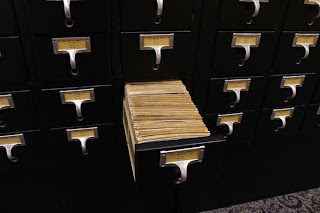 Looking for ships is relatively easy, although there's no guarantee you will find any photos of the ship you you are looking for. We'll stick with ships though, for this blog post, just to keep things simple. Once you find the card box containing your ship name or hull number, you can pull it out and start thumbing through the cards. If you're lucky, it will have a small copy of the photo along with the caption, but not always: 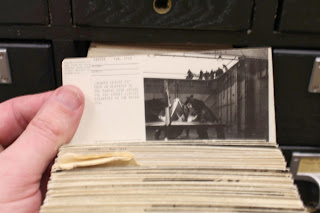 While this can be a little tedious, the whole experience is starting. The researcher has to make a note of every photo number of interest, then take that list to a finding aid that will help match the photo number to the box. A savy researcher will either have a list of photo numbers and boxes, or will turn in a request for one or two boxes just to have something for the first pull, as it may take a couple of hours for your boxes to make it out to you on a cart. After the first pull slip has been filled out and turned in, you can continue matching up numbers and boxes, and build up a list for the rest of your trip, or future ones while waiting.

Compared to the textual records and other photographic records, filling out a pull slip for 80-G is pretty easy. One just needs to know their name, researcher number, date, the fact that they're pulling from 80-G, and the bos number. If multiple boxes are desired, you can enter a range, but it has to be contiguous. SO, you could pull boxes 100-110 with one pull slip, but if you wanted 100-110 plus box 120, you would need to do two pull requests. As you are limited to two carts in total, and only one out at a time, it's wise to be a little paper-heavy instead of just pulling large swaths. Unless, your goal is just to go through the whole series a box at a time!

But then, the boxes start arriving! 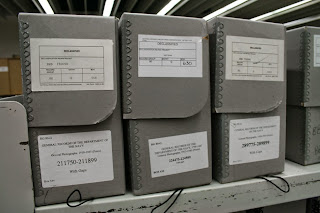 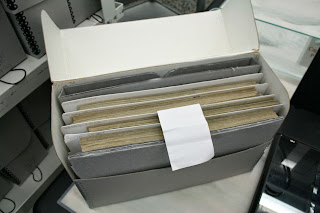 Inside, are folders with the photos mounted on thicker cardboard cards - this helps protect them and also provide space outside of the print for caption data - date, location, subject, etc.. 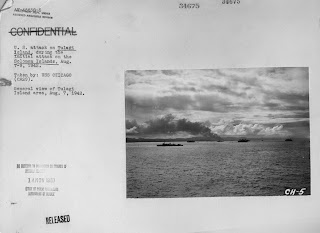 Hard drive space is cheaper than time at the archives, so I usually set my scanner to save the entire platen, and scan as much of the photo and card as I can. When the photo is full-sized, I usually lose the left inch or so of the caption, but I at least have the date and some of the pertinent information on the card in case I miss anything when note-taking as I scan. 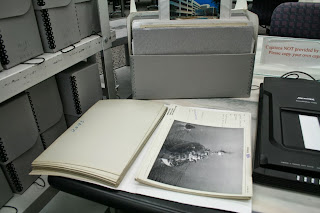 One downside to the cardboard backing is that the edges get beat up over time and start to shed fibers - this shows up as dust on the platen that can show up in the image, so it wise to either wipe the plate clear every couple of scans with the white cotton gloves that are required wearing when handling photos, or with a microfiber cloth / cleaning cloth of your own. 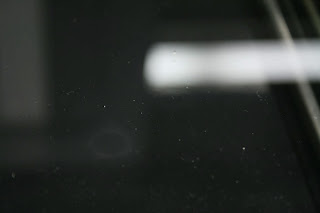 So, that's a little bit of what 80-G is like. Textual records at NARA II or the regional archives are completely different, and takes more thought and planning, so many researchers confine their searches to just 80-G or other photo-only record group accessions. It certainly can be a lot of fun!

Posted by Tracy White at 8:39 PM No comments: