Things I learned at Disneyland

Just back from five days in SoCal. The first two days it rained, then the sun came out and the last three were a nice break from the Seattle weather we'd brought with us. A couple of things I learned while at Disneyland on a rainy day:

- Tinkerbell is not the only fairy that works at Disneyland
- The monorail will stop for ducks on the track. It will also honk like crazy and move forward slowly to scare them off.
- It is best to give the Astro Orbiters a wide berth upon their first run after being closed for heavy rains due to the copious amounts of water that gathers in them and the distance it gets flung as they drain.

Finished proofreading the Franklin report on the way down and just have four pages of photos and two damage plates to add now. It'll be up fro sure in March, sort of as the 64th anniversary remembrance posting. I'll get another Essex class doc posted this month just to make it less lame of a month.
Posted by Tracy White at 10:36 AM No comments: 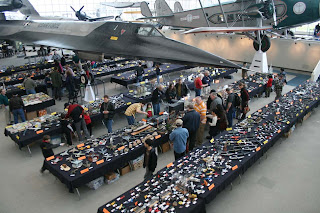 I'm a model builder, and I like to do things to try and help in the hobby. One thing is to show stuff in public areas so people can see the hobby and ask questions... maybe get interested and involved.

Northwest Scale Modelers puts on a good show every year in a great setting. The aircraft above the tables is one-of-a-kind; the M21 mother ship for the D21 drones; the only other example was destroyed in a launch gone bad.

I also spent some time shooting the newly-on-display Fieseler Fi-103 "Buzz Bomb;" drop me a response if you want to see more. 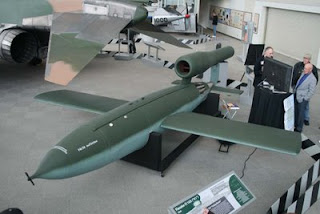 I was looking for a bunch of different ships the last time at San Francisco NARA, and ran into an interesting issue much more than in past research sessions. Due to the research I've done, a lot of ship names seem "familiar" to me for one reason or another. I go with a target list, but if I stumble across something that's of interest I don't often say no. So it was a good thing to have a 3G air card with me so I could quickly look up a ship to see what was tugging at my brain about her.

It happened with DD-689 Wadleigh, although I recognized her name enough to not have to look it up. She was one of the ships profiled in the Structural Repairs in Forward Areas During World War II booklet I posted back in 2006. She had struck a mine and the book covered the repairs done to get her back to the US< but nothing after that, and her Navsource page didn't even mention it or have any photos.

So I was happy to discover that a box I pulled of destroyer records had (amongst other things) photos of the ship in drydock at Mare Island undergoing repair. What was amazing to me was the extent of work and how much of the ship was removed and replaced to bring her back to service. From what I can tell, part of the port side shell of the ship was the only thing kept. She was not only gutted, but almost completely rebuilt amidships.

So, of course I scanned those photos in and posted them to the "Forward Repair" page as an addendum; if you're interested you can see them here at the bottom. My respect for the damage control and industrial side of the US Military continues to grow. She was repaired quick enough to return to battle in WWII, and well enough that she served up to 1983.
Posted by Tracy White at 10:03 AM 3 comments: