History is a Pain in the Ass

One of the features I wanted when I started Researcher@Large was a script that would pull an item from "today's" date and show what had happened on that same date during the war. I'm not programmer, but I can learn enough to be dangerous. I took a couple of stabs at it here and there, but it wasn't until about three years ago that I got up one morning and managed to create something that actually worked.

Of course, that left me with the problem of then having to WRITE all those events down!

I started in on it, and discovered that it's a slow process, if one wants to do it right. There are any number of sites that offer dated information, but often they simply scrape other sources without fact checking or adding anything to the data; it's simply a churn of what has been said before, sometimes in error. There are some good books out there, but they're just a start, and typically focus one one subject.

So to create a list of at least one event for each year for each day can take a while. I started building up a list of web sites that had good, dated information:
http://www.ww2australia.gov.au/
http://www.combinedfleet.com/
http://www.ibiblio.org/hyperwar/USN/USN-Chron.html
http://www.burmastar.org.uk/
http://www.kensmen.com/chronology.html
These aren't all of them, by the way.

And of course, hit my library of books, looking for events.

But there are other problems as well, even with a number of good sources. How accurate are sources? Were the dates based on local time, or does the international date line come in to play (As far as Japan is concerned, the attack on Pearl Harbor happened on December 8). Then, when researching one day, you might find a source that had a whole bunch of good items for other days; do you stop that day or simply note the good source and come back to it later?

I've had to break things down and take it in smaller chunks; the first time I tried it I burned out, and that's something I try very hard not to do; this is a hobby, and it needs to remain fun so that it doesn't die like many other sites. This is something that also happens with some of the larger damage reports I post; the initial OCR of a document may go pretty quick, but the amount of back-channel work dwarfs the original scan and OCR, and I always finish a large report with a lot less enthusiasm than when I started it. So I try and build up a volume of shorter works that I can present while I'm working on the larger ones; that way I'm under less pressure and can take a day or week off if I need a break or life gets too busy.

The "Today in Pacific Theater" history for July became one such monster, but I'm happy to report that the month is done. I started in the middle of June, and had the first ten days done soon enough, but after that things bogged down and became more of a slog. I was working each night just to at least finish the next day's entries. It ate nearly all of my time; I started a new camouflage document at one point when I had an hour to kill without an internet connection, but otherwise my total time on Researcher@Large for this month was a feature that most people probably either won't see or pay much attention to. But I do believe it's an important feature.

For, despite being a pain in the ass, history is something we need to connect to in order to remain connected to it and understand the impacts and implications of events. Events will pass us by sometimes, so I think it's nice to have an extra reminder that there was something important happening to someone, somewhere in the war.
Posted by Tracy White at 8:38 PM No comments:

Some shots from tonight's fireworks at Lake Kathleen. Happy Birthday to the USA! 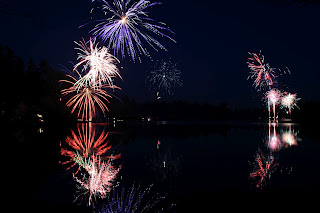 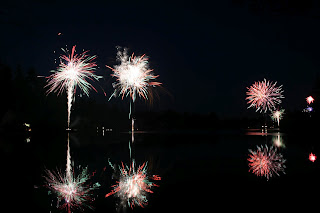 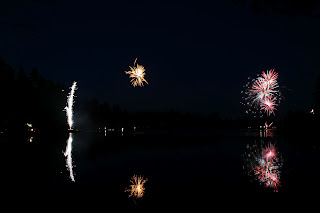 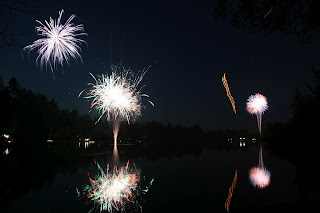