Random Picture: The day after Tarawa

The Battle of Tarawa started on November 20, 1943, sixty-nine years ago. Below is a photo I scanned in of the aftermatch; a random 80-G find. LVT "alligators" damaged and unable to make it over the seawall. The exact date wasn't listed. 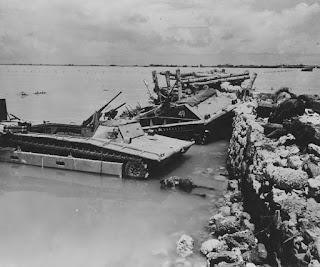 It turns out that the LVT-1 in the rear is somewhat famous and still around. She was named "My Deloris" by her crew and was the first to reach Betio's shore. The LVT-2 in front of her was from a follow-on wave. After the island was secure, "My Deloris" was shipped back to the U.S. as an exhibit for War Bond drives and later restored. She is now at the WWII/Korea LVT Museum at Camp DelMar, Marine Corps Base Camp Pendleton, California.
Posted by Tracy White at 10:58 AM No comments:

Another in my serious of random photos; these two from Record Group 80-G are of Secretary of the Navy Frank Knox arriving at Espiritu Santo for a conference in a PB2Y-2 Coronado on January 20, 1943. 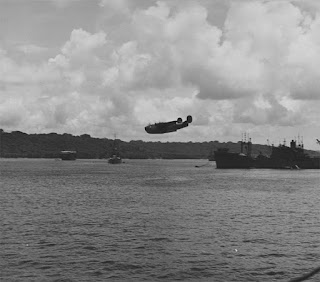 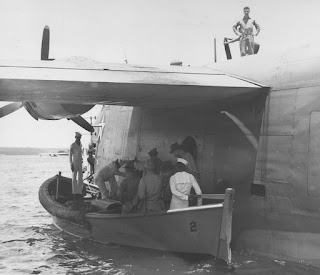 Posted by Tracy White at 7:55 PM No comments:

The Last of My Greatest Generation

Mary Jane Boughner passed away this last Election day, November 6, 2012, She was 94. She was also my grandmother, and the last surviving grandparent. She married Robert Boughner soon after the war broke out and spent it with him in Texas at Garner Field, where he taught aspects of flying using LINK trainers to Army cadets.

On the other side, my paternal grandfather flew blimps for the Navy during the war on the west coast. So it was really no surprise that I had an interest in "the war" from a young age. Both sets of grandparents kept me supplied in World War II history books, and I never really tracked who gave me what, but I suspect that it was MJB who caught on to my interest and fostered it.

She was a librarian and it's not a stretch that she would find books a suitable gift or activity. My brother and I would stay with her and my grandfather for a week here and there in the summers when we were young, and one of the first things she would do would be to take us to the library to get books to read for the week.

I think a lot of my interest in research came from seeds she planted. Upon reflection recently, it occurred to me that she was the family member I most enjoyed talking history and research with. Initially I assumed that this was because my historical research is into a time period she lived through, and that was a life-changer for her generation. But I wonder now if there is something more to it; perhaps remnants of the boy who when shown a new thing or given a new toy, would take that and then say, "see what I did with this????"

Thank you, Mary Jane Boughner, for your love and influence. I have tried to make sure that my life somehow makes the world a better place, and you were one of the examples that drove me to want to do this.

Posted by Tracy White at 9:28 PM No comments: