Found this in today's trip to Seattle NARA. It's a Patrol Wing Four (VP-4) photograph of the USAT Mount McKinley aground on an Alaskan shore in 1942. The caption on the back of the photo is dated October 7th, 1942, but I've had troubles confirming the date and location.

She's reported as grounded on March 11th 1942 according to this page on the US Merchant Marine web site, but the US Coast Guard History for the cutter Haida states, "On March 10th she arrived at King Cove and went to the assistance of the Mount McKinley ashore 1-1/2 miles west of Scotch Cap."

I've been able to confirm it was on Unimak island, about a mile and a half west of Scotch Cap Lighthouse (roughly here). But this photo's date would seem to suggest that she started coming apart fairly quickly (not the missing stern), so either the date on that photo or the Patrol Wing 4 photo is incorrect. 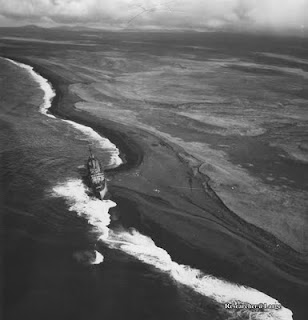 Posted by Tracy White at 7:29 PM No comments: