Martin, before you correct me again....

Yes,I did the math wrong again and it was sixty FOUR years ago that Nimitz released this memo.

Thanks again for the first correction though! ;)
Posted by Tracy White at 8:08 PM No comments:

I lost a friend. Wally Bigelow lost his battle with cancer. Wally, you are still remembered and missed.

Fresh off the presses 65 years ago! Admiral Nimitz sent out a memo detailing some of the lessons learned from Typhoon Cobra and offering advice to commanders and captains.

And there is a largish sailboat tacking outside my window right now. 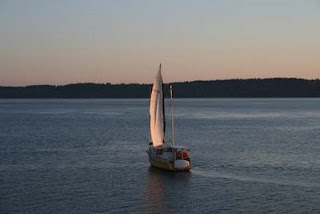 Sorry for the silence... it's been a busy month. I've been the chair for the IPMS Seattle Spring Model Show for the last seven years and we had our show last weekend. It used to get easier each show, but this year we decided to try adding seminars and I was one of the lucky few with a presentation, so my spare time was taken up with both planning for the show and trying to create an hour long presentation on the "Aircraft at Pearl Harbor."

It was a fun project and I wish I had more resources on it as there's just so much we don't know about the airframes involved. Thanks to Dana Bell and Mike Wenger I was able to showcase the six-colored PBY catalinas of VP-11 that were at Kanoehe that morning, which is a relatively unknown question we don't have a complete answer for. If you want an idea of what I'm talking about take this paint scheme and apply it to a PBY airframe.

Following that I had to catch up on some work for a model manufacturer... I hope it's well received and the changes I suggested are put into place.

I've committed to at least one update a month at Researcher@Large, but the document I'd planned on finishing has languished with these other responsibilities... so I'm changing tack a little bit and have just finished a four-page memo from Admiral Nimitz from February of 1945 regarding typhoons... an interesting read I thought and a good example of how the US Navy sought to learn from its mistakes and deaths.