I've finished the USS Enterprise Guadalcanal Damage Report other than the final proof reading. That is doable barring big blow-ups at work.

It's been interesting and sobering to read through as I work on it; her Dictionary of American Naval Fighting Ships Entry just says, " On 24 August a strong Japanese force was sighted some 200 miles north of Guadalcanal and TF 61 sent planes to the attack. An enemy light carrier was sent to the bottom and the Japanese troops intended for Guadalcanal were forced back. Enterprise suffered most heavily of the United States ships, 3 direct hits and 4 near misses killed 74, wounded 95, and inflicted serious damage on the carrier. But well-trained damage control parties, and quick, hard work patched her up so that she was able to return to Hawaii under her own power" but the report highlights more details that paint this in a bit more of a serious light to me:

This bomb detonated almost against the armor plate protecting the ready torpedo and warhead stowage, but no fragments penetrated the armor.

Had this armor not held and the torpedoes been exposed to the blast, what would have happened to the war?
Posted by Tracy White at 3:21 PM No comments:

If History happens and no one remembers, did it ever really happen?

My wife and I ate lunch yesterday on the cuise ship MS Rotterdam of the Holland America line. She was docked at Pier 91 in Seattle, former site of US Navy Base Seattle. While I was there, I shot some photos of the USS Green Bay LPD-20 getting under way and heading north. It was a hazy day, so the first shot is much hazier than we'd all prefer, but just imagine it clear in your mind:

As she headed west she became less back lit and stood out in better detail:

However, as I researched to provide some extra information in this post, it became apparent that Navy Base Seattle has been largely forgotten; The first two hits were from images I sent to Navsource some time ago, such as their LST-817 page showing the ship loading for the invasion of Okinawa.

In fact, it's not until you start looking for Smith Cove that you really start finding information out, such as that the house I shot below is known as the Admiral's House: 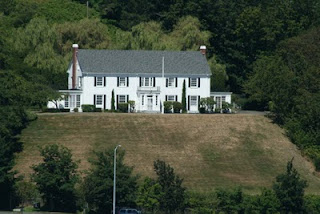 Looking South from the "Lido Deck" (deck 8) stern, we had a great view of the bulk carrier Tian Du Feng loading grain at the Port of Seattle 'Bulk Marine Terminal': 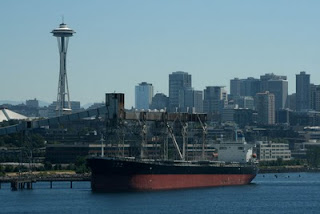 Other than my wife's iPod disappearing aboard ship, it was a pleasurable morning.
Posted by Tracy White at 3:20 PM No comments:

While looking for some information this morning I came across a damage report that I had on my list, but lower down priority wise. However, I noticed this time that it was for action this month in 1942. So here is my challenge: to see if I can post and proofread 24 pages of text in 13 days! You can follow my progress here!
Posted by Tracy White at 1:11 PM 2 comments: