This is a phrase I've been throwing out for a while and I wanted to post it here to both explain it and "anchor" it in case it takes off. It's not strictly research related - I use it more in IT, but it is research that makes me write this today. Put simply; it is easier to think of something than to put it in place. I run into a lot of clients who think that migrating X project will be simple, or that because they want to be able to do something, it should be easy to implement. The same happens with research. The vast majority of people have never researched in any sort of archives and have no concept of what needs to happen. Internet search engines like Google give a false idea of what is possible; people say "I want everything on this ship!" not realizing that you've got many different areas to search because different commands created their own records. A ship generates their deck logs, but the shipyard tracks alterations performed, and the task force commander tracks which ship did what in a particular action. So, if you want a somewhat long way of saying I'm more of an idea rat, then remember "It's easier to conceptualize than actualize."
Posted by Tracy White at 10:00 AM No comments:

One of the nice things about being an American is the effort that was made in the past to make data available to American citizens. Top Secret eventually becomes public, and works that were funded with tax pay dollars are released to the public domain so that pretty much anyone can find and post photos like this without having to worry about licensing fees: 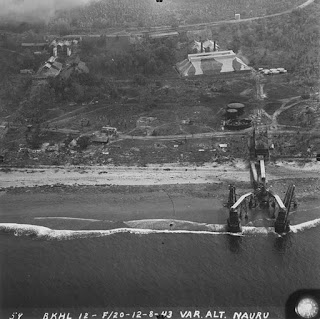 That's part of a bunch of images I scanned in of the raid on Nauru in December of 1943, by the way. These photos were shot by Navy personnel whose pay was funded by the American taxpayer, so that work now belongs to Americans and is public domain. Archives for the Royal Navy are not treated the same way, which is why there are fewer photos and models of their ships, for example. It just costs a hell of a lot more.

So this troubles me. It's a reversal of that sought by the medical publishing industry in order to lock in profits: NY Congresswoman Wants to Deny Americans Access to Taxpayer Funded Research.

Tax-payer funded works ought to be public domain, and freely available, particularly medical information that can save lives. These photos and documents that I find and post are useful and interesting to few, but only in my wildest dreams could I suppose that they might save a life.