Thought for the day

Do aging hippie chicks get hot flash-backs?
Posted by Tracy White at 11:23 PM No comments:

I'd like to thank the city of Seattle for the speed bumps they installed on my street a couple of weeks ago. They really help smooth out the cracks, up-thrust concrete, and pot holes my car has to suffer through on that street every day. Ten speed bumps in half a mile....

Updated the Butler Class DE page on ShipCamouflage.com tonight, adding all of the design sheets I could find on the Navy Historical & Heritage Command Website.
Posted by Tracy White at 10:16 PM No comments:

One of my hobbies is photography. I've got a decent camera, a Canon Rebel XTi that I pack around at times, but I also don't have to go far. On a clear night I can see planes stacked up in to SeaTac nearly to the coast. I sometimes try to shoot them coming in, but they fly such nearly identical patterns (duh) that they all merge into one. One of tonight's shots turned out fun though; three planes. One coming in from the east, one turning in from the east as another one came in on final: 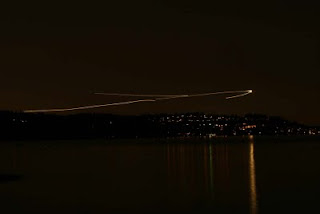 At one point one of the new Airlift Northwest EC-135 Air Ambulances flew overhead and I was able to turn 180 degrees, make some adjustments, and shoot this shot" 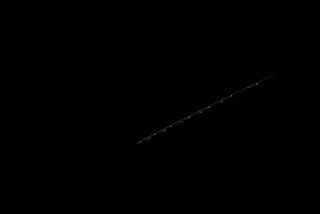 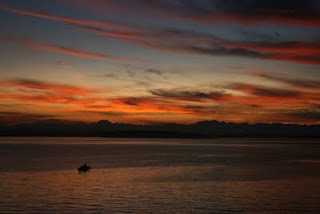 A week or so ago someone e-mailed me looking for names and service numbers of the sailors lost on Shaw DD-373 during the attack on Pearl. It occurred to me that a KIA list would be a good thing to have so I added one. I also decided while I was at it that I should add a couple of the photos I found earlier this year at NARA San Francisco and added them to the December 7th Image Gallery (last three photos). As far as I or a couple of friends from the Pearl Harbor History Associates are able to determine, the second to last one hasn't been published before.

Started working a couple of days ago on the next document (unless I decide on another quick toss off); a 26-page listing of the US Navy fleet and it's organization circa early 1941. This document is doable even though it'll take a month if I do a page a day; ones for later in the war top out around 100 pages!
Posted by Tracy White at 10:38 AM No comments:

I had come across this last month and figured I'd add it; a 1938 Mail Distribution List from the US Navy. It's more for academics, I guess, as it will help people understand WHO was sent particular orders. It's pre-WWII, so it's not as up-to-date as some might like, but I felt it to be a more manageable size. There was NO way I was going to convert all those tables to HTML, and a later version, with the increase in ships and bases, would just take forever to download. Since it was one page of OCR and 8 images, I could turn it out in an hour or so.
Posted by Tracy White at 12:00 AM 1 comment:

Today was the monthly "extended hours" Saturday at Seattle NARA and I managed to get something done I've wanted to do for some time. 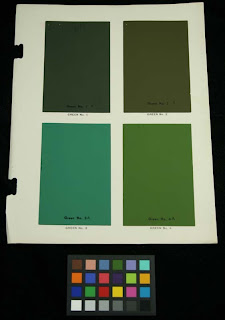 Those are some of the color chips found in a booklet the Navy issued in 1941 on "Passive Defense," which was their term for the camouflage used on shore facilities. The camouflage you've seen on Navy Yard buildings during the war? That was passive defense.

I'd never seen the colors used and no one I talked to had either, so the color chips were a great find. However, what to do with them? We need to get the information out, but computer monitors are so different in the colors they display that I couldn't just scan to a web page. Scanners aren't calibrated for colors and you can't normally bring supplemental lighting into the archives to attain a true "sunlight" wavelength light.

Ron Smith of AA Military Research had a couple of pointers given his research into WWI and WWII camouflage and photography of some of the original artwork produced for those wars. First off, a X-Rite (originally Gretag-Macbeth) Mini ColorChecker Card; calibrated colors with known values so that I can send the photos to another person with the same card and they can calibrate their output to match.

The problem was then lighting, but I got lucky in a sense. Ancenstry.Com has partnered some what with NARA to scan in many documents of interest to their clientèle, and they have a team in Seattle NARA working through some records for a couple of months. They have some pretty expensive "scanning" stations (calibrated cameras with natural lighting hooked into work stations running custom image acquisition and filing software) and I managed to talk one of them into letting me pop a couple sheets under their lights for a quick snap shot. Hoping they don't get in trouble for me mentioning that, but they could see that I'm obviously a "somewhat" professional researcher and was careful around their equipment.

We all win from their understanding though. I will have to finish scanning the rest of the textual stuff later (got 11 out of around 100 pages) and it'll take a while to post all of that as HTML, but I think it'll be worthwhile.

In other positive news, Alaska Airlines dropped the price of their fares to San Francisco from Seattle so I'll be going down for five days of research in late September. w00t!
Posted by Tracy White at 7:25 PM 1 comment: