Some more work done to visualize the effects that nine torpedo hits had on battleship Oklahoma's hull. This is the second sheet colorized, using a slightly different color palette for clarity. Green is air-filled voids, red is oil filled, and blue (only two) is water. These voids were designed to absorb most of the force of a torpedo explosion, but would lose most of their effectiveness after the first hit. 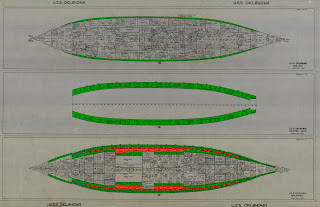 The below side-view shows the added torpedo blister and the armor belt. Note that this is from the Booklet of General Plans and is reversed to show her port side, which explains why the text is backwards. As you can see, the first two hits were below the armored belt. A similar hit on Nevada punched through the dry blister voids and ripped in to the two fuel-oil filled voids inboard of that with enough force that the main bulkhead protecting the innards was then dished in roughly two feet and the compartments began to flood.

As you can see, the hits were fairly bunched up, and the armor belt took a beating. The plates where hits three, five, and seven occurred did not come back up with the ship, although whether they were blown free or pulled free when she was rolled upright is not known.
Posted by Tracy White at 11:40 PM No comments: 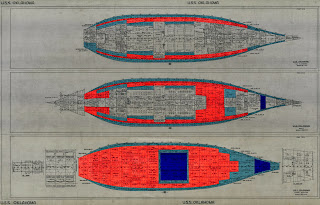 I've been working on understanding the death of Oklahoma better so I can explain it to others, and I thought a good visualization of her Torpedo Defense System might help. This is the lower three levels of the ship, below the armor belt. Red is oil (fuel oil, diesel, etc.), blue is water (feed water mostly) and the medium blue are empty voids (air).

This is downsized from the original - not meant to be the final posting, just showing the start of a new project.