I was in Hawaii last week, and as regular visitors might know, a visit to Arizona:

One of Arizona's anchors with the Memorial between a fluke and the stock. 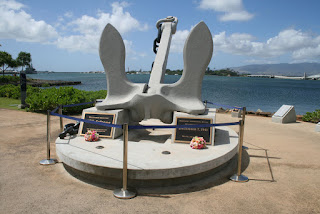 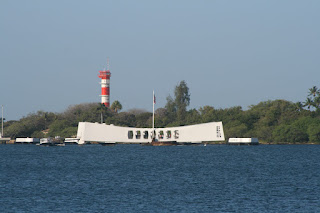 We timed our visit perfectly to catch the nuclear aircraft carrier Stennis CVN-74 departing Pearl Harbor and rendering honors. I was the last off the boat, which left me in a good position to shoot this quickly from the entrance (even though they said to wait until we were in the memorial). A second after I shot this, you could hear "salute!" come from the Stennis' loud speakers. Thank you to the crew for a fine example of the continuing respect Arizona is given. 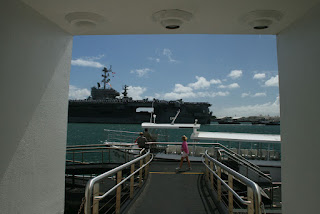 The wind was fresh, making it difficult to get good shots of Arizona's oil. Tide was headed out to sea. 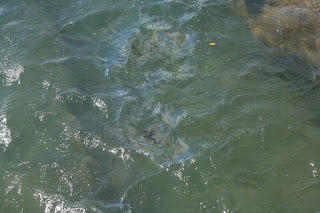 Working from Stern forward; Barbette #3 with some of the ventilator shafts visible closer and under the surface. 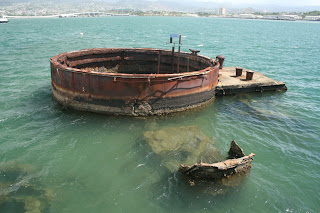 Casemate 10's outline can faintly be seen here on the starboard side, just forward of the forecastle/main deck break at Frame 88. Biths and Chock outboard at deck edge: 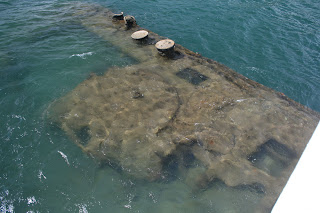 The remains of turret #2 just break the surface, looking towards Battleship Missouri. Wind rippled, yet peaceful water that over 1,100 sailors rest eternally underneath. 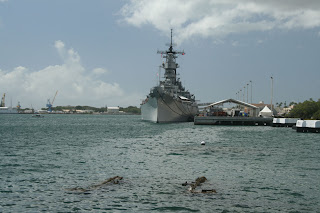 Stennis had been partially turned around by the time we needed to line up on the rails and loomed large in the openings. 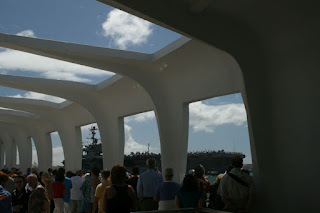 We visited Battleship Missouri the next day and a rainbow was visible from the bridge, connecting the Memorial to the Visitor's Center. A fitting Hawaiian Islands tribute. 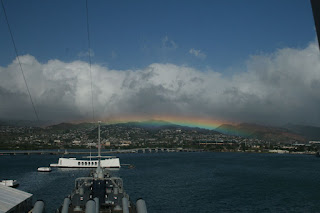 I came across this document yesterday. It's a small example of how one can trip across an interesting story if one pays attention, or perhaps has the time to look at documents that aren't exactly in their main area of focus. A Naval officer planned to escape and evade if the Japanese took Guam and report in via radio. It so happens that he was captured the day the report was authored and held as a prisoner of war for the duration, but without this he would have been lumped in with the nearly 500 other Americans who were captured when the island fell.

It's one of the things that slows me down when posting documents that have names. Most of us have read plenty of books by the survivors of the war, written shortly or years afterwards; there are even books still in circulation that were created during the war in a heavily edited form that was meant to give some information, build up some heroes, and keep the public positive towards the war effort. But documents like the USS Helena CL-50 Pearl Harbor Engineering Division report give us a rare opportunity to hear from men like WaterTender, Second Class Raymond Baldwin, who went down with Helena when she was lost at the Battle of Kula Gulf.

So, if you have the time, pay attention to the names you see in some of the documents you read; you might find an atomic playboy hiding here and there!

Posted by Tracy White at 9:51 AM No comments: