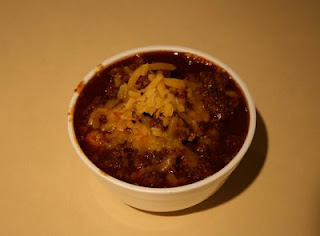 For the last seven or so years I have enjoyed the chili of an amazing man. I was introduced to Joe Canavan's World Class Chili by a co-worker when I was working down town. It was truly world class chili; the best, in my opinion, on the west coast. A group of friends and I had been eating at McKinley soups at Westlake center on pretty much a weekly basis (although we also ate at other restaurants there), but we quickly started walking the extra five blocks to Joe's place in the Pike Place Market. Joe was always very friendly with his customers, although he was known as the "chili Nazi" to some people due to him chasing non-customers away from a table he had just outside his restaurant. We used to sit at that table specifically during lunch hour to make it easier on him as he was there at work, starting every day at 6AM, over seventy years old and with bad hips that hurt him.

Joe was a Marine (not Army, as his obituaray is currently saying) and had fought in the Korean War, taking part in the Battle of Chosin. You could tell he was special; he'd been there and had seen hard things, but was enjoying life; he was tough but fair and friendly if you were.

I started helping him out; I did his website and would go in once or twice a month to help him with his computer. Robin and I helped judge the chili contests he ran at the market and tabulated all the results from the voting for him so he could concentrate on other things. It was the least I could do as thanks to a man who had fought for our country, and who was so nice to those around him.

Joe died this month while snorkeling in Maui. We'd talked about his trip for a couple of months... I lived on the island for a while and sent him ideas for things to do during their first trip to Hawaii. I don't know if he was at one of the locations I suggested when he had a heart attack, but regardless, he went out as I knew him; active despite his pains, living life to its fullest.

Joe, I will miss you and keep you in my thoughts. You set the gold standard in my book for chili, and were an inspirational person in my life. I can offer no higher tribute.

EDIT: A food writer for the Seattle Times has blogged about Joe.
Posted by Tracy White at 10:29 AM No comments:

I've been working on a review of Hasegawa's 1/350th Aircraft carrier Akagi for ModelWarship.Com. Text of the Franklin report was finished about a week and a half ago, but none of the proofreading has been done yet, nor have I done any work on the photos and damage plates. Hopefully this week.....
Posted by Tracy White at 10:10 AM 1 comment:

Way to lame out

I don't pull punches. If something is wrong, I usually speak my mind, unless I have to be diplomatic for work. Even then I'm pretty outspoken. If someone wants to accuse me of being too much of a hardass on this, I won't argue, but I think that ModelShipWright.Com is run by a bunch of amateurs who are knowingly trying to build their site up by theft of the hard work of others.

A couple of weeks ago I noticed a couple of threads on u-boat aces such as this one that contained an awful lot of text and photos. There was extensive information, and you just don't normally see someone post that much material in such a fashion, so I got a little suspicious and started poking around. It turns out that most of the text and photos were lifted en mass from other sites, without any sort of attribution.

I posted responses to a couple of the threads to that affect, in one cases showing paragraph examples and in another simply listing the two pages that material had been copied from. The threads were removed from the message board without comment, but this morning I received two notices of actions taken upon my posts:

Hello TracyWhite,
This is a courtesy email to inform you that a recent post of yours on ModelShipwrights was removed for the following reason:

Hello TracyWhite,
This is a courtesy email to inform you that a recent post of yours on ModelShipwrights was removed for the following reason:

Posting a warning is an inflammatory RANT?

And then a new "Copyright Infringement Policy" post by Mark Smith went up, with the following text:

Some of our posts of late have come under question of copyright law infringement, and after close and careful examination, the posts have been re-instated.

Simply stated, this is the KitMaker Networks policy outline on the issue:

"These posts (by a volunteer with no financial interests in KitMaker or Model Shipwright) were meant to be informative and done in the spirit of 'fair-use' as outlined by US copyright law. Further we are asking all users of the site to (as a courtesy, not a legal requirement) give credit to any sources of information they may post.

Also it is the site owners policy that if a copyright owner takes issue with any of their material being used by modelers on a community based web site such as this, than they can contact us to ask that the information be removed."

This indicates that they don't understand copyright law and are, in fact, just fine with misuse. Naming it a "Copyright Infringement Policy" is ironically apt.

Notwithstanding the provisions of sections 106 and 106A, the fair use of a copyrighted work, including such use by reproduction in copies or phonorecords or by any other means specified by that section, for purposes such as criticism, comment, news reporting, teaching (including multiple copies for classroom use), scholarship, or research, is not an infringement of copyright. In determining whether the use made of a work in any particular case is a fair use the factors to be considered shall include —

(1) the purpose and character of the use, including whether such use is of a commercial nature or is for nonprofit educational purposes;

(2) the nature of the copyrighted work;

(3) the amount and substantiality of the portion used in relation to the copyrighted work as a whole; and

(4) the effect of the use upon the potential market for or value of the copyrighted work.

In regards to part (1) while they may argue that the poster receives no monetary compensation for his posts, he is listed as a "News Writer" for the site, and the site itself does generate some revenue through banner ads and google AdSense, I.E. it is of a commercial nature.

In regards to part (3) "The amount and substantiality of the portion used," Instalment 2 has 14 images "courtesy" U47.org and the words "Extract from www.u47.org" below portions of text 14 times as well (some of those are multi-paragraph sections). I don't have the time to come up with a percentage of the U47.org site used, but that is a significant amount of both text and images. Additionally, the US Copyright office says this:

Acknowledging the source of the copyrighted material does not substitute for obtaining permission.

Finally, part (4); the "effect of the use." This one is harder to quantify but I believe that any time you copy text you in effect dilute the original. If there is one site on a topic, it is the un-disputed top ranked site, but if there are two, then its position has been diluted. When they permit the copying of that text, they are in effect making it so that less people may stumble upon the site that invested the time and work into posting that material in the first place. Regardless of any monetary damage, they are causing actual harm in terms of the traffic that goes to that site.

One of the reasons I post information, for example, is that it tends to draw more out. I have a site on the USS Ward, for example, and after my site went up I received somewhat regular contacts from former Ward sailors who provided me with even more information. I have received photos from at least two sailors as well as action reports and deck logs, and these are things I would not have been able to obtain otherwise.

Now, I'm not claiming there should be any monopoly on information like that, I'm just arguing that there is actual harm in such reposting of material, even if the person who originally posted it hasn't done so with any obvious commercial intent.

"These posts (by a volunteer with no financial interests in KitMaker or Model Shipwright) were meant to be informative and done in the spirit of 'fair-use' as outlined by US copyright law. Further we are asking all users of the site to (as a courtesy, not a legal requirement) give credit to any sources of information they may post.

But there is no SPIRIT of fair use, copyright is a law. Stating that giving credit is a courtesy and not a legal requirement further demonstrates lack of understanding of copyright law as well as taking a weak stance against plagiarism; it's not an endorsement of it, but it really does nothing to discourage it either. Attribution is one of the requirements of fair use as the owner of the work in question has the right to claim ownership, and by stating it's not a legal requirement the crew over there are setting the site owner up for a nasty surprise at some point.

And in his final sentence. Mark Smith states with emphasis that if the COPYRIGHT OWNER takes issue, then they should contact ModelShipWright to have the material removed.

Written another way, UNLESS you are the copyright owner, we don't care if what we have posted is done legally or not.
Posted by Tracy White at 9:30 PM 1 comment: